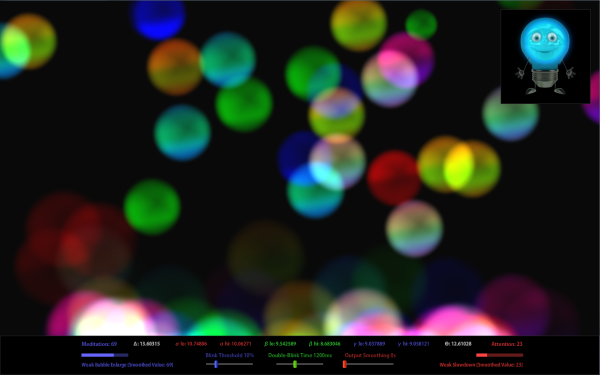 On the plus side, MindWave is an increasingly cheap EEG headset which is much easier to persuade people to wear and the API is Open enough to hack games and the like (higher resolution raw EEG streams are encrypted and require a tidy fee).

On the negative side eSense doesn’t seem particularly consistent and is not intended or usable for real-time control.

Ensure that blink detection is working well. Close to 100% accuracy is attainable. Don’t squint or exaggerate the blinking action significantly.

The Bulb Indicator will light when signal quality is good, flicker with low signals and dim completely with signal loss. Your blinks should be mirrored by the character consistently.

Other Controls and Visualisation

To add further control dampening use the Smooth Output slider – this weakens the affect of both eSenses on the bubble stream.

The Double Blink Time slider sets the total period during which two blinks are considered a ‘Double Blink’. Usually best set at 750 to 1300 milliseconds.

The other EEG outputs are used arbitrarily to set the colour range and transparency of the bubbles . This is pretty much random in effect, but red maps to alpha, green to beta and blue to gamma. The delta and theta values are combined to influence transparency.

Cause and Effect Sensory Light Box is a touch skills app on iPad and Android, the Windows and OSX versions are free downloads. Support for blink switch control is now included and NeuroSky eSense levels can also be displayed when using the other control methods.

Switch Box Invaders was written for iOS4 and a switch user with complex needs; prior to Apple adding nifty switch accessibility in iOS7 there weren’t really any playable games for him. It was designed to account for developing and erratic switch skills so a good candidate for experimenting with blink control.

Downloads for Windows and OSX desktops are available. The game is played using a single switch press which toggles the direction of the UFO and fires a bullet, provided the previous bullet has left the screen or hit something.

Accumulative eSense values are also employed, with high Attention preemptively detonating the enemy bombs and high Meditation values repairing the UFO if it is damaged.

Feedback appreciated if you find these of use, or can achieve better control than us.