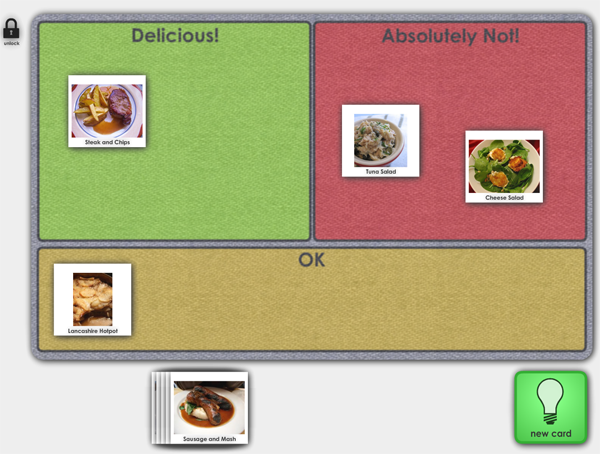 This was my personal favourite from the prototype tools I did for the Action for Kid’s Sparking Change project. We also distributed it in beta form with about a dozen testers using in earnest for a few months – mostly in school or care settings.

See AFK Sparking Change for a little info from them on the project.

This particular tool targeted people with moderate to severe intellectual disability. I’ve added this video as the server-side components are are now offline – the beta versions from the project will no longer work.

The facilitated interview style this software supported borrowed from approaches such as choice boards, picture exchange and Talking Mats, which have been trialed extensively with people who had significant intellectual/communication disabilities and/or dementia.

The Talking Mats Project themselves have since brought out digital tools which support their overall interview approach directly – but at the time use of physical picture exchange cards, card lexicons and comms boards or folders was the norm. Likewise, several choice board apps have appeared among the huge variety of AAC apps for iOS which are now available – though none yet collate data or integrate search into workflow this smoothly.

On a previous project resources had posed frequent practical difficulties for us as many new items/areas came up during interviews – also as singular symbols from the formal AAC libraries we were using represented absolute and similar concepts quite poorly for participants.

AFK had bought a suite of multi-touch Windows 7 PCs which allowed cooperative working between interviewer, using keyboard and mouse, and interviewee using the touch screen. iPad and OSX prototype clients were also created – most of the functionality was server-side.

Survey results were stored in a central database as quantitative data along with a screen shot, as specific placement sometimes had significance. Where the same mat was re-used with several interviewees, or multiple times for validation interviews with the same user, responses could be combined into a single dataset and exported as Excel Spreadsheets for easy analysis.

Non-private mats designs and lexicons could also be shared across multiple users to gradually build a library of validated symbols and lexicons.